To mark the 50th anniversary of the release of Sgt. Pepper’s Lonely Hearts Club Band on June 1st 1967, our Friday Poem this week is taken from Newspaper Taxis: Poems After The Beatles. 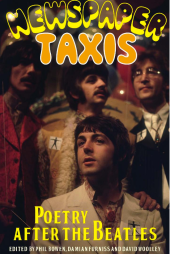 Newspaper Taxis collects together poems that showcase the vast and varied influence The Beatles had on the way we lived then and the way we live now. With contributions by myriad of poets, young and old, including Simon Armitage, Carol Ann Duffy, Elaine Feinstein, Peter Finch, Adrian Henri, Philip Larkin, Lachlan Mackinnon, Roger McGough, Sheenagh Pugh, Jeremy Reed, Carol Rumens and Katherine Stansfield (featured here), this book is a response to the Beatles’ creativity and capacity to influence successive generations.
‘Relic’ by Katherine Stansfield imagines what the buyer of one of John Lennon’s teeth, auctioned in November 2011, might do with it. The poem blends together the whimsical and the macabre – ‘After fifty years it looks / like forgotten popcorn’. With humour, and wistfulness, the poet brings back the ‘long dead croon’ to play again in all our ears.