This morning, to celebrate National Walking Month, we have a guest post from avid walker and author of Walking Cardiff Peter Finch. He tells us what walking in a lockdown looks like for him when separated from his fellow wanderer John Briggs and how it is affecting work on their next project.

Walking in a Lockdown

Out, up the hill, it’s always the same hill.  Weave into the road to avoid the next guy.  Smile.  Sometimes they smile back.  Climb.  Runners pass, headphoned, sneaking up behind silently and then zooming on in a rush of huff and sweat.  Advice I’ve read tells me that being laterally near a runner isn’t too bad.  It’s getting caught in the slipstream you need to avoid.  How do I police this?  I’m thinking of adopting a Friar Tuck walking pole.  Thrash it about.  Make myself utterly anti-social but certainly safe.

On the way back down, with the on a clear day splendid views of the city’s high-rise and the sea beyond, I try to imagine myself elsewhere.   Walking the Valleys again. The follow on project to Walking Cardiff.  Writing such a book during lockdown, getting there by Google but pretending it’s real, is akin to studying Macbeth through Coles Notes and never reading the actual text.  Not that we are without some touch of genuine experience.  Both John Briggs, my fellow Valleys wanderer, and I have walked Valley landscape and township extensively together in planned excursion.  We’ve also done this individually in swift half days to scope a place out -a couple of hours rambling Ponty looking for traces of Dr William Price and Iolo Morgannwg and a few more in Ron Berry’s Blaen Cwm checking out the entrance to the Rhondda tunnel and the end of the world streets Charlie Burton painted so well. 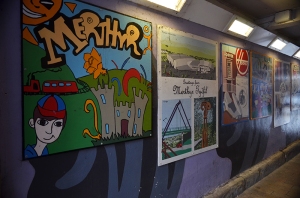 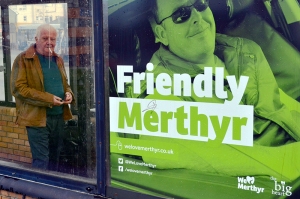 We’ve walked these places historically – mine often recalled through fog – a reading with Mike Jenkins at the Imp in Merthyr, as a child accompanying my father to work in Ystrad Mynach,  to one of Harri Webb’s legendary parties at Garth Newydd.  John’s have usually been done through actual photographs.  He’s sent me a great thirty-year spread of black and white coal pits taken across the whole Valley landscape, a detailed set of Merthyr Tydfil done one Christmas in 2014, and then, his piece de résistance, shots taken on a Literary Tour (which, under the auspices of Academi, I organised but, for unfathomable reasons now, did not go on) in the company of Daniel Williams and Nigel Jenkins to look for traces of Idris Davies in the valley top town of Rhymney. 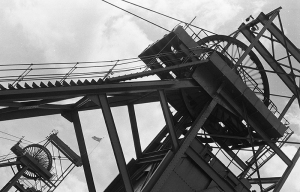 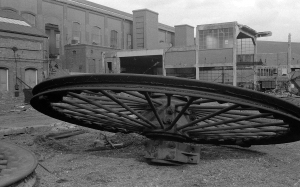 Rhymney was the place we were right in the middle of exploring when the virus struck and our ability to walk freely was rudely curtailed.  I’d walked around the centre on my own – found the Idris Davies plaque on the house where he died, seen the Michael Disley statue of the miner and the steelworker back to back over one of Pete Seeger’s Bells of Rhymney and had a cup of tea and a piece of doorstep toast in the café with no windows on the High Street.  Looking later at John’s pics, taken in 2011, that statue looks bright and new.  It looked stained and neglected when I passed. 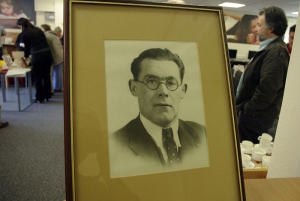 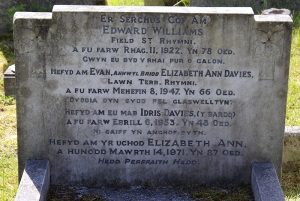 John had one well up on me.  He’d also visited the actual Davies grave in Rhymney Cemetery and stood listening to Nigel’s sonorous voice recite extracts from Gwalia Deserta.  Idris Davies, the people’s poet, the miner who could rhyme and make memorable our collective fears and aspirations.  His Maggie Fach and 1926 I’d help turn into poster poems, famous throughout Welsh bedsits for a whole generation, back in the 70s.  It was good to trail in his wake.

South of Rhymney station was a place where neither John nor I had yet ventured.  Here was land once occupied by Bute’s great Egyptian-styled Union ironworks but now vacant and worn.  On it  stood the operation of K J Services Ltd.  This presented the world with the greatest assemblage of broken, bust and otherwise abandoned mechanical diggers and JCBs anyone could imagine. Running for miles.  Visible from space.  There’s a YouTube tour, I discovered, and an overhead walkthrough available on Google Earth.  That’s all we have for now as the virus chases our tails.  When it’s dead John and I will visit in person.   For all this virtual stuff, Zoom meetings, Skype chats, Facetimes, Houseparty romps and desk research until my eyes ache you just cannot do without first person.  Don’t let anyone say different.

Don’t forget you can get 20% off when you sign up to become a member of our book club.

One thought on “Guest Post: Peter Finch – Walking in a Lockdown”