Every year, we observe two minutes silence at 11am, on the 11th day of the 11th month to mark the moment The Armistice began in 1918. Today, as we once again take time to remember the sacrifices made by servicemen and women in the armed forces, we’re sharing some of the commemorative titles we’ve published during the last 40 years. Lest we forget.

Men Who Played The Game by Mike Rees

The Great War and the resulting unimaginable loss of life had a profound effect on servicemen and those at home, perhaps never more so than in the case of sportsmen, who fought ‘battles’ on the pitch or in the ring according to rules devised for fair play. Men Who Played the Game by historian Mike Rees explores the development and importance of sport in Britain and the Empire leading up to the outbreak of the First World War, and the part played by sportsmen in the conflict. The book opens with revealing chapters on how various sports – the fans, the governing bodies and the sportsmen themselves – reacted to the outbreak of war. This book is an invaluable guide to the relationship of sport and war, to the state of sporting Britain, and a moving testimony to the fate of so many sportsmen.

Robert Graves: War Poems draws together all of Robert Graves’s poems about the Great War. It consists of his first two major published volumes: Over the Brazier (1916) and Fairies and Fusiliers (1917) as well as the previously unpublished 1918 manuscript, ‘The Patchwork Flag’. Critical and contextual introductions by editor Charles Mundye provide biographical and historical context, locating and ranking Graves amongst the other soldier poets of the First World War: Sassoon, Owen, Thomas, Rosenberg et al.

Alun Lewis (1915-1944) was the most prominent writer of World War Two, in poetry and short fiction.  He was born in the industrial valleys of south Wales and grew up during the deep poverty of the Depression. Set against this background and war, Alun, Gweno & Freda is an account of Lewis’s life and his writing, through the particular prism of his relationships with his wife, Gweno, and with Freda Aykroyd, an expatriate in India whose house provided respite for British officers on leave. The book argues that Lewis’s charged relationships with these two women were the key to both his writing and his mental health. It also explores the circumstances surrounding Lewis’ death by a single shot from his own gun and contributes to the ongoing debate about whether this was an accident or suicide.

And You, Helen by Deryn Rees-Jones and Charlotte Hodes

This specially commissioned collaboration between poet Deryn Rees-Jones and artist Charlotte Hodes explores the life of Helen Thomas, wife of the poet Edward Thomas who was killed at the battle of Arras in 1917. Rees-Jones’s sequence takes Thomas’s only poem addressed directly to his wife, ‘And you, Helen’ as its starting point, and imagines Helen after Edward’s death. Complemented by a meditative essay on the complexities of the relationship between the poet and his family, and on war, grief, marriage and bereavement more generally, this is a critical exploration through a personal lens.

This scholarly volume offers insight into the highly influential writer and poet Edward Thomas, through his correspondence with Walter de la Mare: 318 letters from between 1906 and 1917. Poet to Poet offers a moving epistolary account of the developing personal and poetic relationship of both poets, with biographical revelations, and increased understanding of their influence on each other and key points relating to their poetic processes.

Each month we are celebrating one fantastic Seren author in honour of Wales’ Year of Legends. This month the spotlight falls on Robert Graves.

Robert Graves began publishing poetry after the outbreak of the First World War, for which he enlisted in 1914 as a junior officer in the Royal Welch Fusiliers.

He was one of the first to write realistic poems about the experience of fighting on the frontline. His first volume, Over the Brazier, was published in 1916, and by 1917 he had produced two further collections of war poetry whilst still on active service. Over the Brazier and Fairies and Fusiliers earned for Graves the reputation of an accomplished war poet.
You can find all Graves’ war poetry in recently published Robert Graves: War Poems (Seren, 2016).

During his lifetime Graves published more than 140 books, including fifty-five collections of poetry (he reworked his Collected Poems repeatedly during his career), fifteen novels, ten translations, and forty works of non-fiction, autobiography, and literary essays. His best known works are his memoir of World War One, Goodbye to All That, The White Goddess, and the novels I, Claudius and Claudius the Great.

Here is Graves’ poem, ‘Hate Not, Fear Not’, from his previously unpublished collection The Patchwork Flag (1918) which, almost a century after composition, has now been brought into print as part of Robert Graves: War Poems. 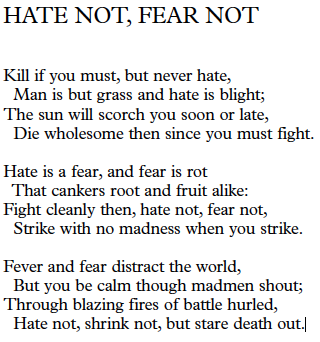 Robert Graves: War Poems is available from our website: £19.99

Find a great selection of books by our other legendary writers on the Year of Legends page.

And don’t forget to sign up to our free, no-purchase-necessary Book Club for 20% off every book you buy from us.