Happy St David’s Day / Dydd Gŵyl Dewi Hapus. 1st March not only marks the first day of Spring, but also St David’s Day here in Wales. To celebrate, we’ve rounded up a list of great books by some of our Welsh authors. How many of these have you read?

Miriam, Daniel and Me – Euron Griffith

Miriam, Daniel and Me, Euron Griffith’s first novel in English, is a gripping story of relationships and simmering unrest in 1960s Gwynedd, driven by love, jealousy and vendetta. Spanning three generations of a North Wales family in a Welsh-speaking community, Miriam, Daniel and Me is an absorbing and compelling story of family discord, political turmoil, poetry, jealousy… and football.

A Place of Meadows and Tall Trees – Clare Dudman

A Place of Meadows and Tall Trees is a lyrical and insightful evocation of the trials of the first Welsh Patagonian colonists as they battle to survive hunger, loss, and each other. Impoverished and oppressed, they’d been promised paradise on earth: a land flowing with milk and honey. But what the settlers found after a devastating sea journey was a cold South American desert where nothing could survive except tribes of nomadic Tehuelche Indians, possibly intent on massacring them.

A Last Respect celebrates the Roland Mathias Prize, awarded to outstanding poetry books by authors from Wales. It presents a selection of work from all eleven prize-winning books, by Dannie Abse, Tiffany Atkinson, Ruth Bidgood, Ailbhe Darcy, Rhian Edwards, Christine Evans, John Freeman, Philip Gross, Gwyneth Lewis, Robert Minhinnick, and Owen Sheers. It is a who’s who of contemporary poetry which shows the form in good health in Wales.

Cardiff-based poet Abeer Ameer writes of her forebears in her first collection, Inhale/Exile. Dedicated to the “holders of these stories”, the book begins with a poem about a storyteller on a rooftop in Najaf, Iraq, follows tales of courage and survival, and ends with a woman cooking food for neighbours on the anniversary of her son’s death.

Illustrated in colour Wales’s Best One Hundred Churches encompasses a millennium of churches around Wales, from tiny St Govan’s tucked in its cliff-face, through ruined Llanthony to the magnificence of the cathedrals at Llandaff and St David’s. It is an invaluable repository of history, art and architecture, spirituality and people’s lives which will appeal to the historian and the tourist, communicants and those without a god.

Four Dervishes draws on a long tradition of storytelling as it skewers issues like religious bigotry, injustice, the denial of women’s rights, and class division. Lavishly inventive, verbally rich, an exotic confection, this novel is both darkly thematic and humorously playful.

A dangerous tale of desire, DNA, incest and flowers plays out within the wreckage of an ancient spaceship in The Meat Tree: an absorbing retelling of the Blodeuwedd Mabinogion myth by prizewinning writer and poet Gwyneth Lewis. An elderly investigator and his female apprentice hope to extract the fate of the ship’s crew from its antiquated virtual reality game system, but their empirical approach falters as the story tangles with their own imagination. By imposing a distance of another 200 years and millions of light years between the reader and the medieval myth, Gwyneth Lewis brings this tale of a woman made of flowers closer than ever before, perhaps uncomfortably so. After all, what man can imagine how sap burns in the veins of a woman?

We Could Be Anywhere By Now – Katherine Stansfield

In her second collection, We Could Be Anywhere by Now, Katherine Stansfield brings us poems about placement and displacement full of both wry comedy and uneasy tension. Stints in Wales, Italy and Canada, plus return trips to her native Cornwall all spark poems delighting in the off-key, the overheard, the comedy and pathos of everyday life.

Christopher Meredith’s fifth novel Please, full of humanity, sly humour and verbal invention, is his shortest and arguably his funniest, most innovative and most outrageous. It’s a tragicomedy touching on themes of the limits of knowledge, on isolation, and male frailty in new and playful ways as octogenarian language geek Vernon, whose never written anything longer than a memo, tries to write the story of his long marriage.

It’s 1st March – Dydd Gŵyl Dewi Sant Hapus (or Happy St David’s Day) to you! This Welsh holiday has been celebrated since the 12th Century, and honours Wales’ patron saint.

On such a historic holiday it seems fitting to consider Wales’ history, and our Friday Poem does just that – ‘Perspective’, the opening poem from Docklands by Damian Walford Davies, introduces Victorian Cardiff: the chilling and visceral setting of this intriguing ghost-story-in-verse.

‘When much new poetry looks no further than the poet’s navel, this kind of imaginative leap is a tonic.’ – The Telegraph

Damian Walford Davies’s compellingly eerie new poetry collection, Docklands: A Ghost Story, introduces us to a Cardiff architect – a man supremely sure of himself – as he is commissioned to transform an area in the busy docks. Docklands explores grey worlds at the edges of the eye, conjuring late-Victorian Cardiff’s hustling, booming, sullied docks – and the horrors they conceal.

Docklands: A Ghost Story is available from the Seren website: £9.99

Dydd Gŵyl Dewi Hapus! Happy St David’s Day to one and all.

This is a day to celebrate Welshness, so that means warm Welsh cakes, bunches of fresh daffodils and one or two good Welsh books to read.

Why not celebrate this St David’s Day by investing in a new book published by one of the fabulous Welsh publishers? Visit your local bookshop or gwales.com to see the great selection of Welsh books out there. 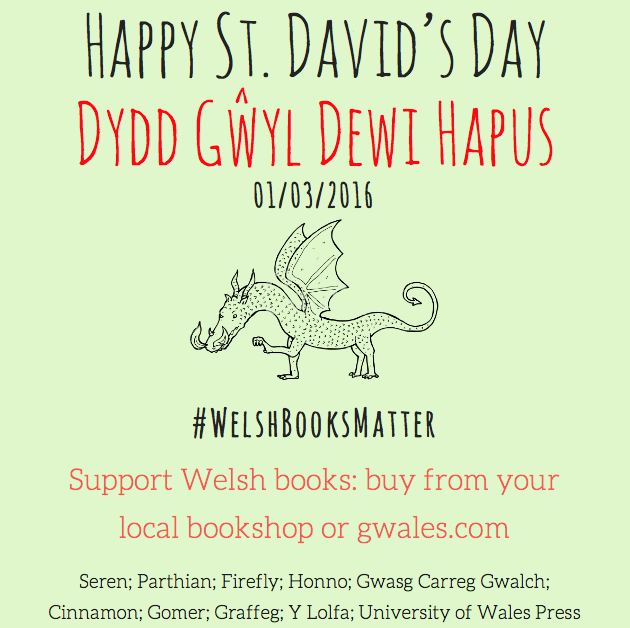 Want to know more about our Welsh publishing friends? Read a little about each of them below.

Firefly Press have loads of great children’s books including Branford Boase-longlisted Aubrey and the Terrible Yoot.

Honno has a well-deserved reputation for publishing some of the best women’s literature in Wales.

Gwasg Carreg Gwalch publishes an astounding range of Welsh interest books for adults, children and visitors to Wales in both Welsh and English language.

Cinnamon are an innovative press, publishing fiction, poetry and non-fiction books, not defined by genre but by their ability to be thought-provoking and to say something new.

Gomer is the oldest publisher still running in Wales and publishes across the board with children’s titles, plays, poetry, bilingual books and more.

Graffeg have produced and published over 100 illustrated books since 2003, with titles about food, arts, culture, heritage and architecture, gardens, landscapes, photography, sport and lifestyle.

Y Lolfa started out as unofficial printers to the new, activist Welsh Language Society in the ’60s, and have evolved to produce an ever-widening range of popular books in both Welsh and English.

University of Wales Press publishes around 70 new books and journals a year, primarily in the fields of European studies, philosophy, literature, history, Welsh and Celtic studies.

And lastly there’s us here at Seren, bringing new poetry, fiction and non-fiction to you each year. From our list we suggest Jerwood Fiction Uncovered Prize-winner Significance, Man Booker Prize-longlisted The Last Hundred Days or Costa Poetry Award-winner My Family and Other Superheroes for some extra-special St David’s Day reading.

There is an astounding amount of literature produced in Wales each year, everything from fiction, to guide books, to scholarly material. We hope you find a new book to fall in love with this St David’s Day. Support Welsh publishing, because #WelshBooksMatter.

All titles in our Mabinogion series are just £5 this weekend in honour of St David’s Day. Get the full Box set for £60 or an exclusive limited edition signed box set for just £80. (Feb 28th – March 2nd)